The past few weeks, have been very busy with playtesting. Ahau – Rules of Yucatán will bring you the most enjoyable experience possible! We focused our efforts on streamlining, removing rules and features that seemed unnecessary according to most playtesters. To make thing more challenging a few elements were also added to keep players on their toes.

Check out the Rulebook! 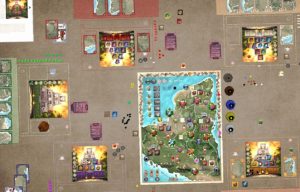 Improvements made to Ahau – The progress of streamlining

Activation/inactivation of workers
This was one of the core gameplay mechanisms. It seemed neat to ‘tap’ and ‘untap’ your workers in cities to collect resources (or do various other stuff). It just wasn’t that well-received, and needed to go.

War Track
The side board also needed to be sorted out. It was too difficult to plan your movement there. The player board and the main game board seemed enough for most players to focus on. Certain elements of the side board were saved. The exciting War Track which is now featured beside your pyramid on the player board.

Regions
The board now consists of 6 regions instead of 7. This increases the likelihood of two players secretly selecting the same region card, resulting in conflict between rulers. This is considered the most fun part of the game by all.

Cities
Now there are only 10 cities instead of 12. There are no “coloured” cities. Instead, each God has two cities. Placing a worker in a city of the god instantly activates your tiles with the same god symbol. Giving powerful bonuses, this means more opportunities to use your engine built during the game.

Scoring completely revamped
The game will be played over a period of 3 K’atuns. (A K’atun is a Maya unit of time meaning approximately 20 years. Historically each Maya ruler celebrated his or her rule after the end of a K’atun. This was marked by celebrations and building of large pyramid complexes.) At the end of a K’atun, your pyramid will be scored in an exciting new way. We will share the details in upcoming posts.

God powers vastly streamlined and simplified
Each God lets you gain a pyramid tile, a resource, put your marker on a production site (for later bonuses), move a worker or sacrifice a worker. This speeds up the game, meanwhile, there are still lots of interesting decisions to be made.

We could go on, and we will. But for now, trust us when we say that the game is MUCH BETTER! As attested by the feedback of numerous playtesters.