Tikal was one of the biggest cities of the time, peaking at around 90,000-100,00 inhabitants. Its architecture included temples that tower over 70 meters high, large royal palaces, in addition to a number of smaller pyramids, palaces, residences, administrative buildings, platforms, and inscribed stone monuments. By 600 AD it had a sports stadium, a school, a hospital, and a library packed with thousands of books. 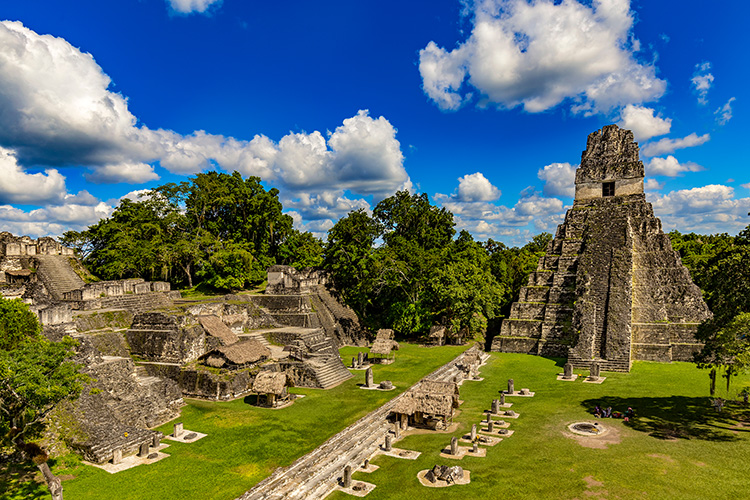 Similar to Palenque, the city of Tikal has its fair share of widely-known and respected rulers who made their names known throughout the region through conquest and building large pyramid complexes. The dynasty line of Tikal included more than thirty rulers that we know of. Several of the tombs of these rulers were discovered as well, which is exceptional.

One of the most famous ahau of Tikal was Chak Tok Ich’aak I, or also known as Great Paw or Great Jaguar Paw. Earning quite a title was only fitting for a great ruler, as the jaguar is linked to several mythologies worldwide, and it represents tremendous inner power, therefore being free of social restrictions.

Chak Tok Ich’aak I was not the only ahau who owned a title including the name of the mighty beast – right in the very same line of the Rulers of Tikal we can find Balam Ajaw – Decorated Jaguar, Unen Bahlam – Queen Jaguar, and Chak Tok Ich’aak II – Jaguar Paw Skull. Adding “Balam” to your name in any form was a tremendous honor, signaling the divine connection between the ruler or the priest and Ek Balam, the Jaguar God. As the example of Unen Balam shows, it was not unlikely for a woman from noble birth to rise to power.