There are a handful of important cities in Ahau, the boad game. Tulum is one of the famous walled cities of the pre-Colombian era and probably with the most breathtaking view as well. Built on a bluff that faces the rising sun every morning, Tulum is the only known Maya site that is located right on the beach of the Caribbean.

The walls were effective ways to defend the city from outside threats and attacks. Tulum’s wall served as an especially strong defense, as the city survived several decades after the Spanish invasion started. The architecture of Tulum is a classical Maya style of design. The three most significant buildings are the Temple of Frescoes, the Temple of the Descending God, and the El Castillo – a similar but much smaller building than the temple in Chichen Itza. 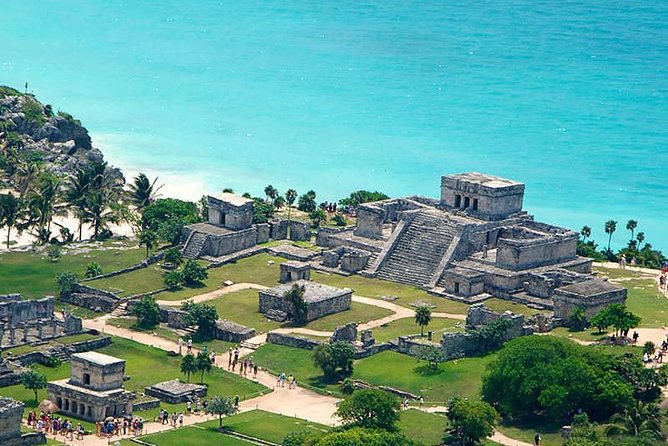 The Temple of the Frescoes had a significant social and religious importance as it was purely dedicated to honoring the gods with no other purpose that we know of. The two-story building is filled with mural paintings depicting both male and female deities, sacred snake symbols, and scenes where a part of the harvest is offered to the gods as a gift. Flowers, fruits, and most importantly, corn were a fitting present to offer to the Maya deities.

In the building, you can find stuccoed masks which are most likely to represent Itzamna, the mighty god of creation in Maya mythology. But the most curious and stunning detail of the Temple of Frescoes is undoubtedly the second floor, a tiny sanctuary covered in crimson coloured handprints.