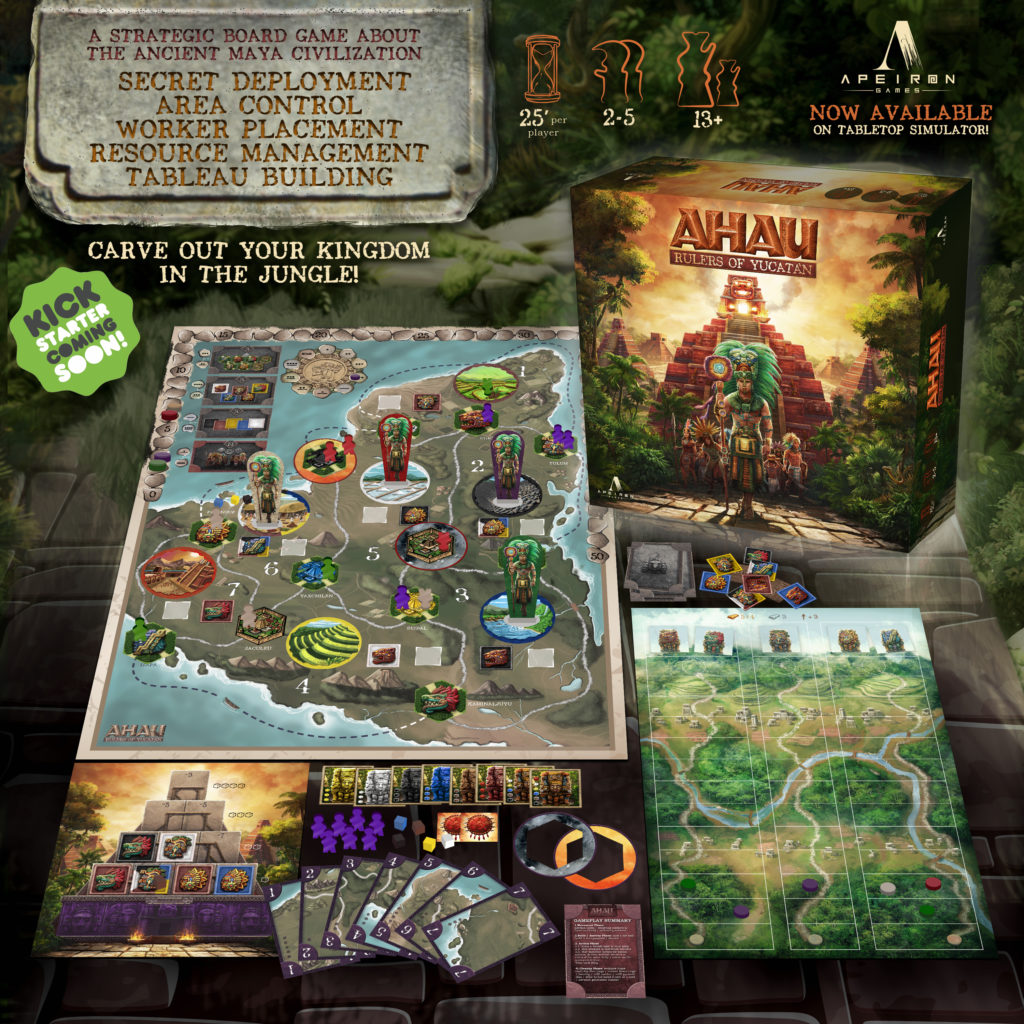 Climb the ladder of power! Start as the ruler of a small city and use your strategic skills to become the most influential ruler over Yucatán!

Manage your resources wisely, build your pyramid temple and invoke the ancient Maya gods to dominate your opponents!

for exclusive offers and updates available only to our subsribers and backers relating to our upcoming Kickstarter campaign!

Ahau is a thematic strategy board game combining worker placement, resource management, and engine building mechanisms. At the end of the game, the player with the most Fame wins.

The average playtime is 90-120 minutes, the recommended age is 14 and up. We are planning to release Ahau on Kickstarter in the autumn of 2021! 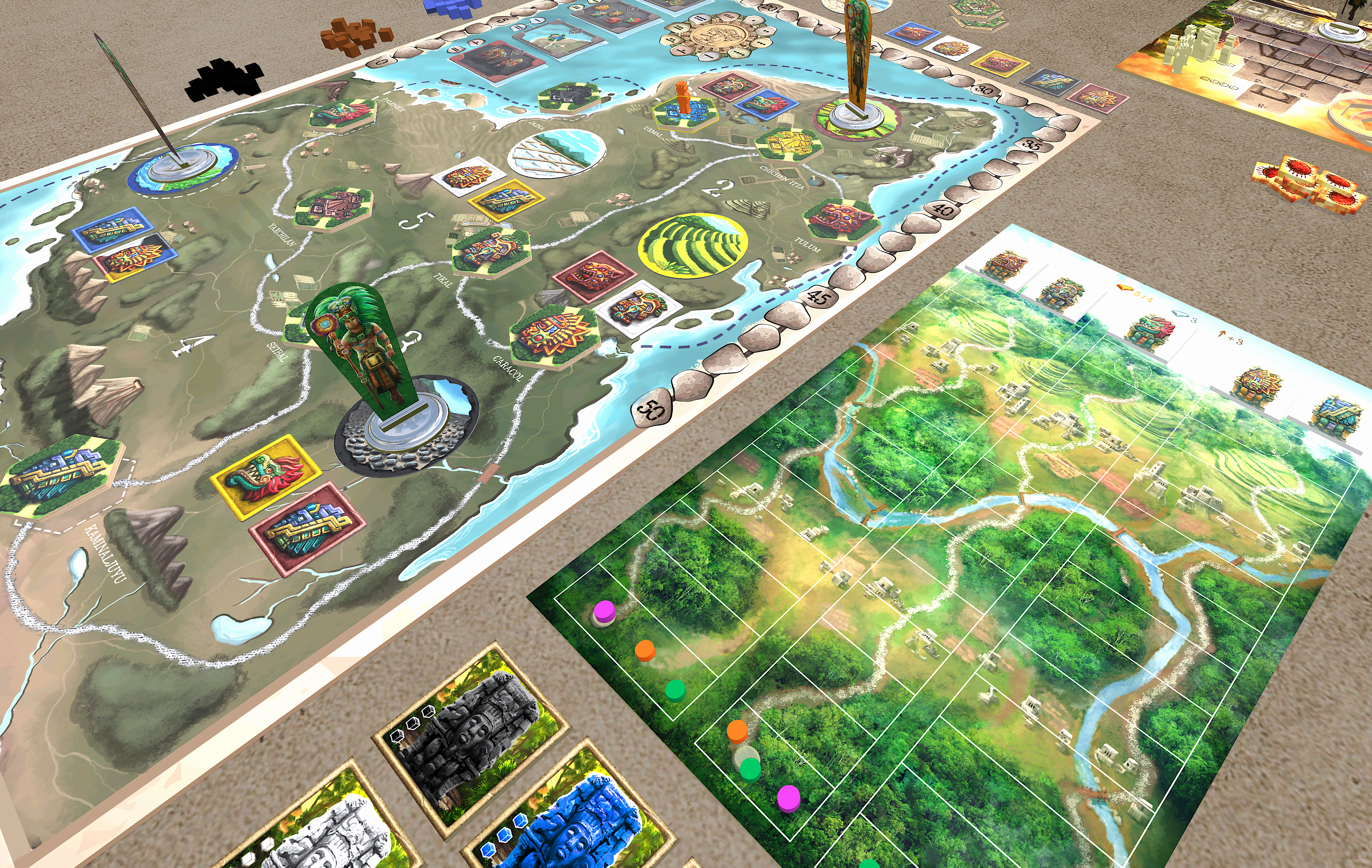 How is the game played?

The game will consist of multiple Katuns. Each K’atun will consist of rounds, and each round will consist of a movement phase and action phase. During the movement phase, each player will secretly choose two cards from their hand, the left-hand indicating the region that you wish to occupy with your Ruler. If multiple players selected the same region, a conflict is triggered, which will be primarily decided by the value of your right-hand card showing your base military strength. During the Action Phase, each player will take a pyramid tile from the region occupied by their Ruler; place a worker in a city adjacent to that region; summon a god of that city (optional); produce resources or build pyramid tiles / stele tiles (optional). At the end of each K’atun, players can gain Fame for the status of their pyramid temple, and the status of the common temples. (screenshot taken from the Tabletop Simulator version of the game)

If you want to know more about the rules, be a subscriber and gain access to the first draft of the official rulebook of Ahau – Rulers of Yucatán! Take a sneak peek at the first page. 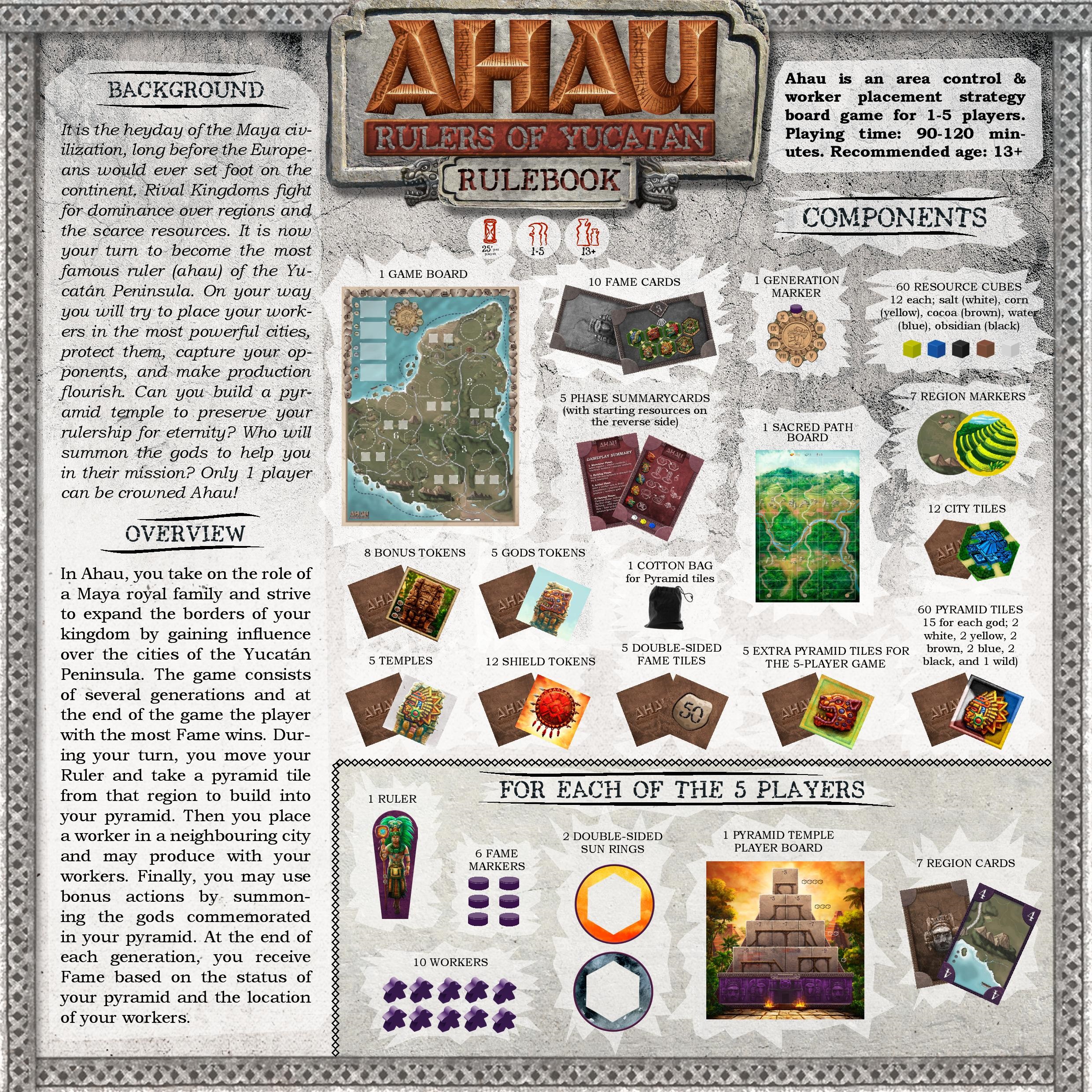 You MAY summon the god matching the City where you placed your worker, and take the bonus action offered by that god as described below. You get as many activations from that God as the number of matching tiles in your pyramid. You may choose to discard any number of matching tiles from your reserve to gain that number of additional activations. If you do not have any tiles in either your Pyramid or reserve, you cannot summon that god. Place one of your summoning markers on the appropriate temple. You may summon a god any number of times during the game, but you may only place one of your summoning markers in each temple once during each K’atun.

The god powers can be summarized as follows:

For each activation move any number of your workers from a City to an adjacent City. You may move the same worker multiple times. You may not move your opponent’s workers. When moving, you must still observe the limit on placement rule 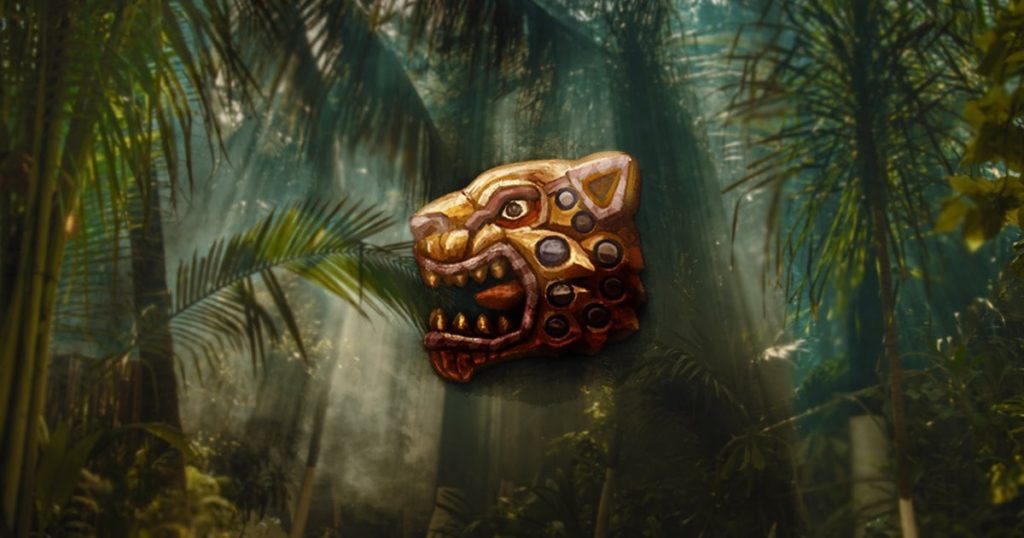 For each activation sacrifice one of your workers by removing that worker from any City. Gain two Fame points for each of your Feathered Serpent tiles built into your pyramid.  You may sacrifice the worker you placed during this turn. You may not sacrifice another player’s worker.

Place the removed worker back in the game box. 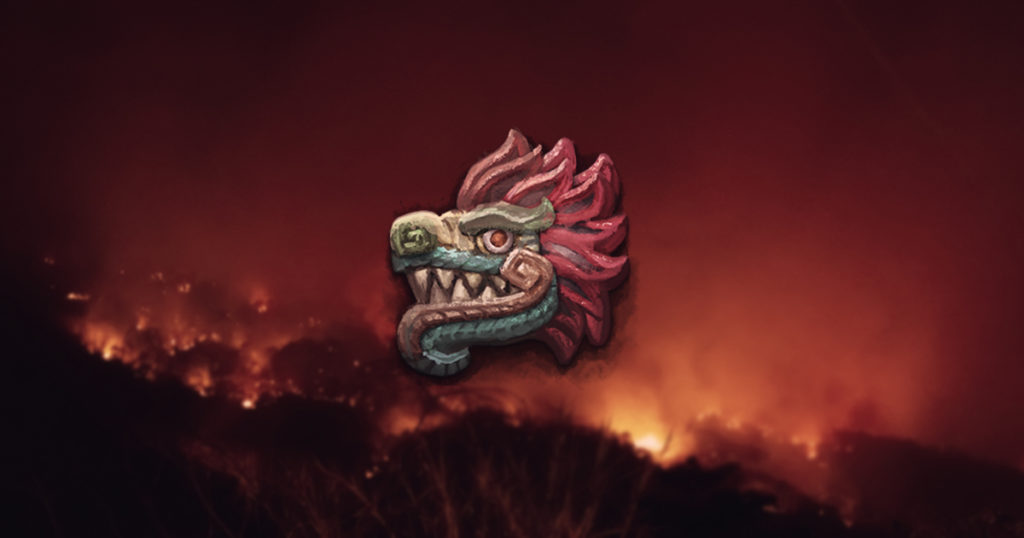 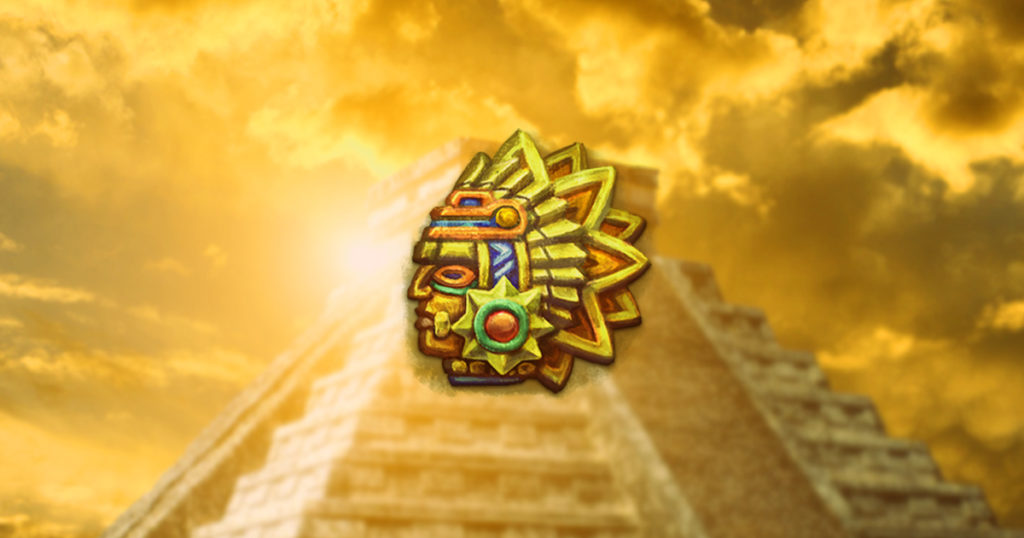 For each activation take a matching colour resource from the general supply. 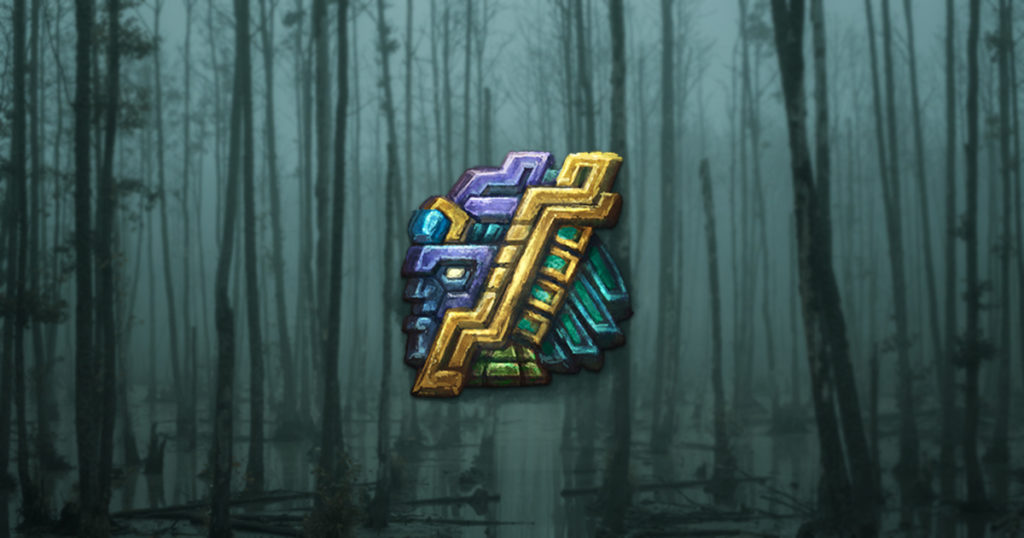 For each activation draw a Pyramid tile from the draw pile or a region not occupied by a ruler. 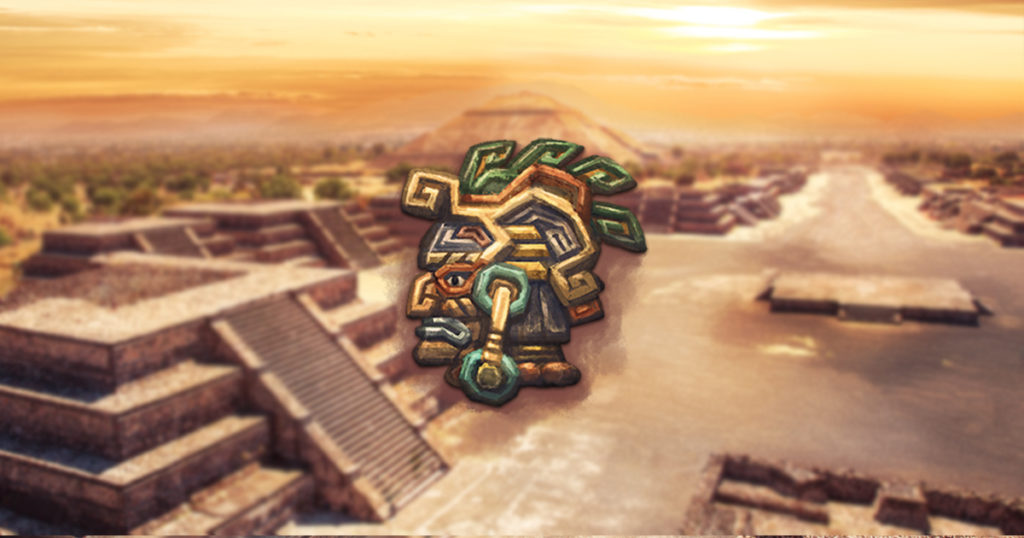 If you prioritize building your pyramid temple or Stele(s) as soon and effectively as you can, the Master Craftsman will be your favourite Role Card to choose. With its help, you get a discount of two resources when building any Pyramid or Stele tile; this can speed up the process of the construction significantly. 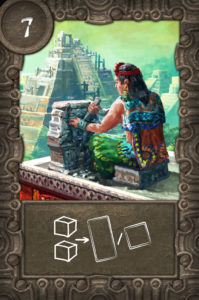 Become the High Priestess and when you call for the otherworldly powers of the Maya gods, add 1 to the number of activations you receive! As your magic is flowing through borders, you can summon a god in any city, not only in the one where you placed workers during the recent Action Phase. 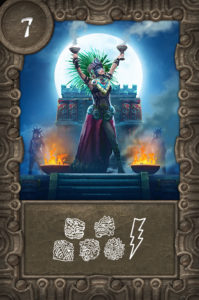 Wise resource management is a must to succeed in Ahau. 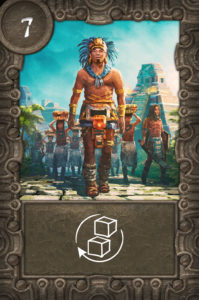 After all players revealed their cards in the Movement Phase, the vastly powerful Warlord enables you to move your Ruler to an adjacent region, whether it is occupied or not. 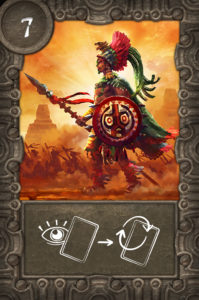 Suiting her title, the Queen Role Card is the strongest of them all, offering 9 base strength, which is the highest option. By playing the Queen card, you are able to place an additional worker in the city where you placed your other worker in the Action Phase. But be aware that the limit on placement is still relevant in this case! 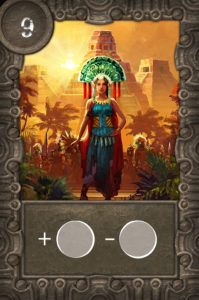 What do people love about the game?

Building your pyramid temple creates a sense of achievement. It is like a quest of its own, a game within the game, given that you can only build tiles that are of the same colour or deity symbol. You will also need the necessary resources to build that tile. Finally, you have to plan in advance to make sure that the built tile will give you the most useful bonus actions and the most points through the course of the game. 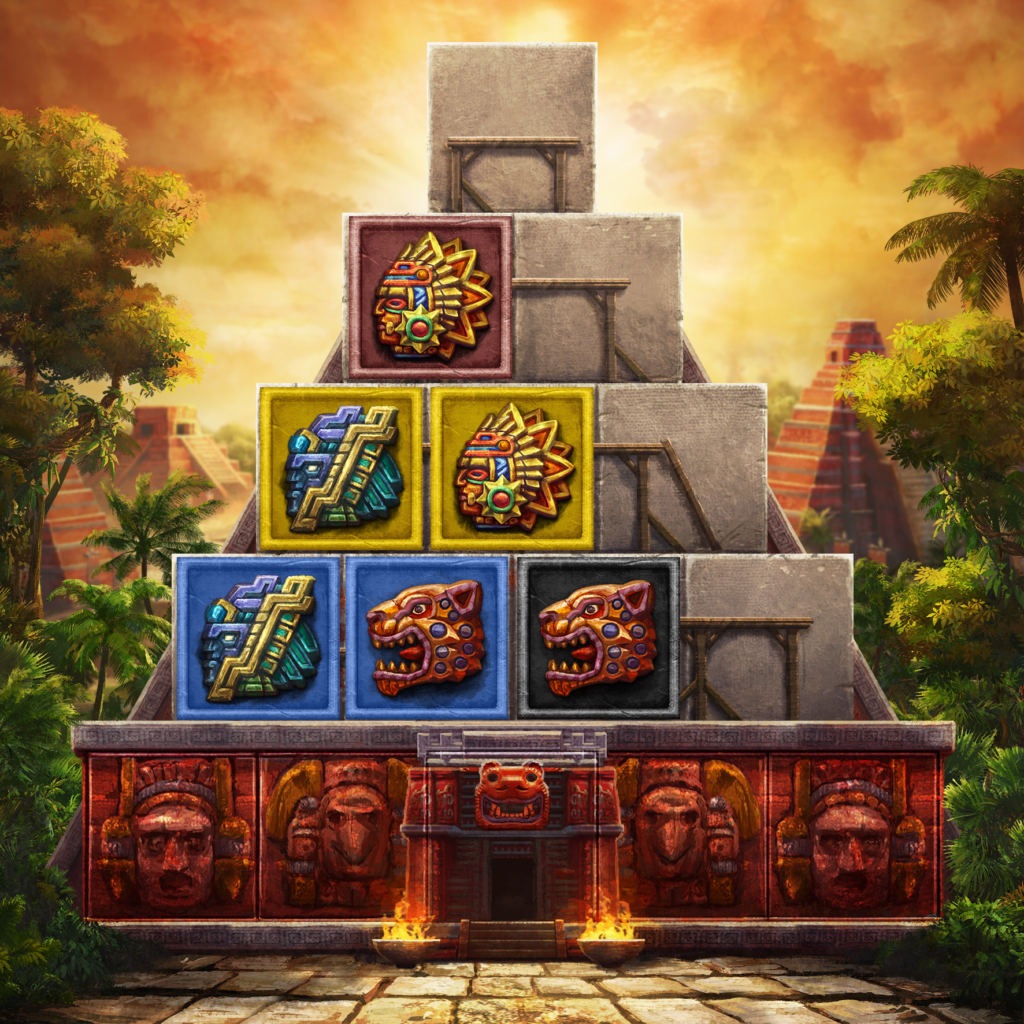 Succeeding in Ahau does not depend on anything else than your strategic skills. You will need to make tough decisions:

The game has tremendous replay value. There is no strategy that can work in all situations, you will have to adapt your strategy for each setup and each in-game state which requires advanced skills and thinking. First of all, the region markers, the cities, the pyramid tiles, and three scoring cards will be placed randomly on the board during setup. Finally, new pyramid tiles to the emptied spots at the end of each round. This in itself will ensure that each game is completely different. 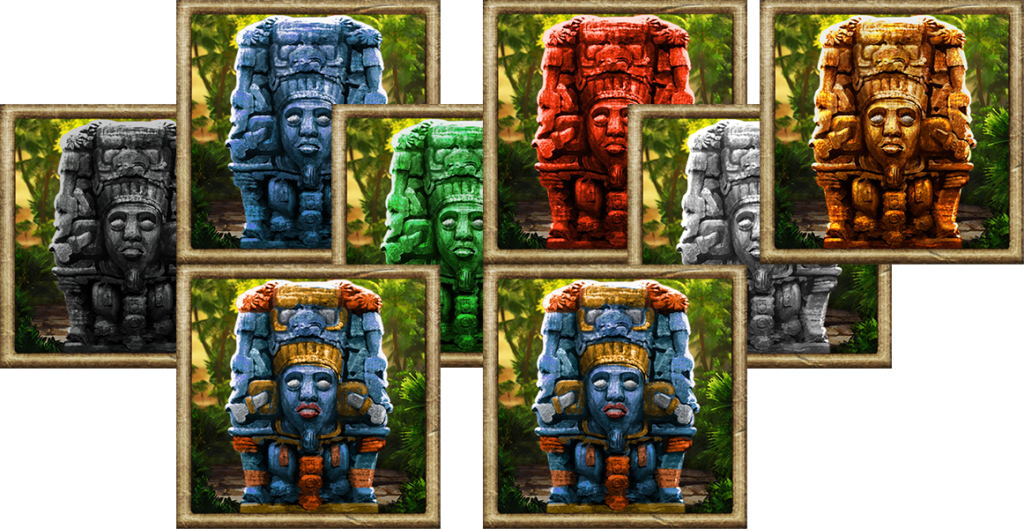 The players’ decisions made during a round broken down into two phases. This will not only speed up the game but reduces the cognitive load on the players, thereby putting them in the magical ‘flow’ state. 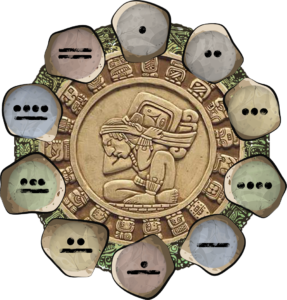 The game immerses itself in the culture and history of the ancient Maya. The game board features a map showing the territory of the classical Mayan civilization with several historical buildings and artifacts. The deities which can be invoked for bonus actions were carefully selected to represent the Mayan pantheon, including Kukulkán, the feathered serpent, the god of peaceful trade among nations, and Kinich Ahau, the sun god who represented the divine nature of the ruler. The regions show resources (corn, limestone, water, cocoa, obsidian) that characterized the trade of the era. The pyramid temple serving as the individual player board and the cover art were inspired by the Temple of the Night Sun, a building featuring a series of masks illuminated by the rays of the sunset. Even the progress of the game is depicted by an ancient Mayan calendar with Mayan numerals. Finally, the whole game was designed to imitate the struggles of rival city-states who sometimes trade peacefully, or sometimes go to war.

For each of the 5 players: 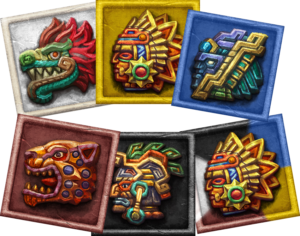 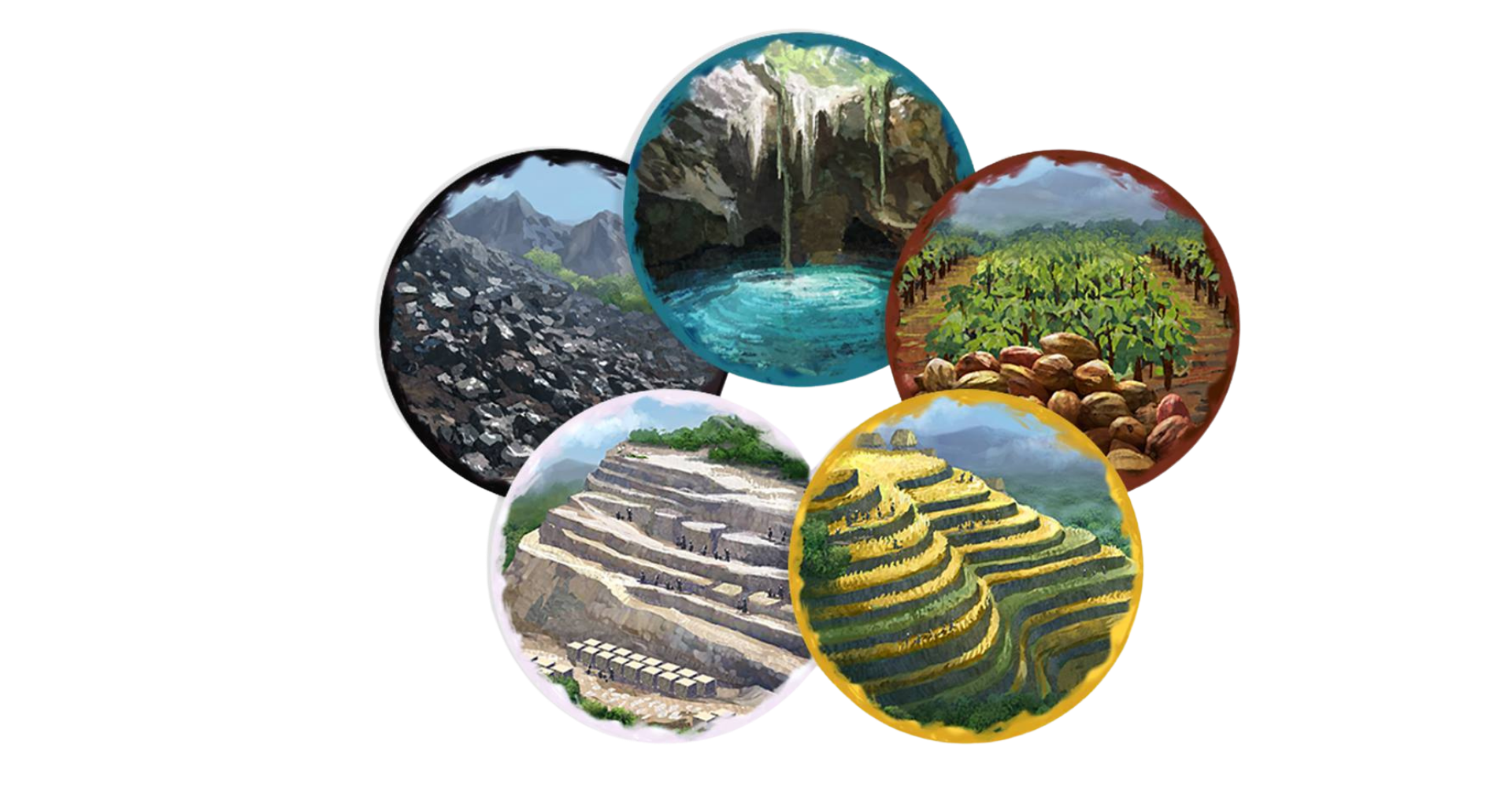 How many times has the game been tested?

Ahau is a labour of love that has been in development for over two years and has seen many iterations to find its current form. From its first early prototypes, we focused our efforts on getting a playable version of the game on the table, playing it and listening to the feedback of playtesters, then making the changes necessary to create a better version of the game that is deeper, more fun and enjoyable. The game test count is around 70. The game has been extensively playtested and developed jointly by the author and Kicktester, a professional playtesting group.

While designing and developing Ahau – Rulers of Yucatán, it was only natural to have our knowledge double-checked about the ancient Maya history and culture by a widely known and respected professional, to maintain cultural sensitivity and an educational value. Mayanist David S. Anderson, professor of anthropology and archaeology, instructor at the Radford University in Virginia, U.S., agreed to provide valuable insight on several aspects of the game. It was an exciting and humbling experience to work with him and gain a deeper understanding of the Maya culture.

Or you can check out David’s impressive resume on the following link: https://radford.academia.edu/DavidSAnderson/CurriculumVitae

What should I know Apeiron Games?

We are a small indie publisher comprising a group of a talented individuals, who have a passion for board games.  The game is planned to be self-published on Kickstarter under the brand name Apeiron Games. There are other games in development by Apeiron Games that are also planned to be released through crowdfunding.

Will Ahau be available through channels other than Kickstarter?

Most likely no, but who knows at this point, we would not like to limit our options.